Matthew 13:54-58, on the occasion of the Profession of Perpetual First Vows of Jesuit Novices Jaclay, Masaya, Renier, Paulus, and Giovanni 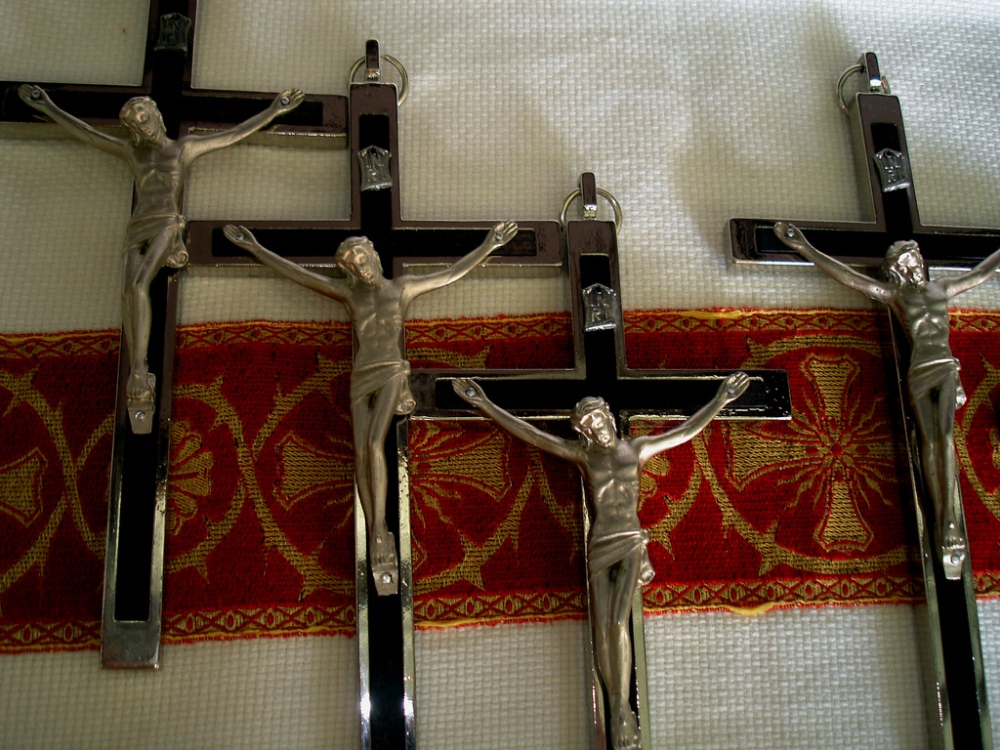 Mang Tino is our longest-staying and most cheerful sikyo. He always says, “Salamat po. Good morning, salamat. Good afternoon, salamat po. Salamat.” Two years ago, on a retreat, I spent some time again with Mang Tino. He talked about his wife and about how kind the Jesuits are to him; talked about work and how kind the Jesuits are to him; talked about God healing his cancer and how the kind Jesuits helped him along. It’s a tale he tells everyone. But did he ever tell you about his bicycle? Every day, as he gets home from work, Mang Tino parks his bike, pats it, and says to it, “Salamat ha?” “Hindi pa po ako naaaksidente sa bike na ito, Father,” he said. (He’s never been in an accident on this bike.) “Kaya pinapasalamatan ko po ‘yan araw-araw.” Cute, di ba?

There was a whole stretch in my youth when I witnessed mom and dad endlessly trigger each other’s anger. Many times, kuya and I were terrified that their marriage wouldn’t survive the next storm, and dad might finally leave, and we’d be a broken family. After one particularly bad fight, we were in high school then, dad came up to our room and bared his heart. Finally, he said, “Alam n’yo, anak, matagal na sana kaming naghiwalay ng mommy, kung hindi lang dahil sa inyo.” If it weren’t for their love for us, they’d have long separated. Well, they stayed together, 51 years, until mom died 4 years ago. Last year, on their wedding anniversary, dad texted me. “I miss your mom, anak.”

I’m sure it’s no secret to you that if Fr Chris were not in Sacred Heart, he would love to be back in Cambodia, where, once upon a time, Fr Chris gave his hands and feet to the victims of landmines and polio. In return, they gave Fr Chris their hearts. Eh, ginalingan ng lolo n’yo. He was called back to be here. And Fr Chris came running, heart bursting with memories and a bagful of tears, perhaps, he came running. Fr Willie, also my primi like Fr Chris, he did some running, too. When I heard he was assigned to Zamboanga, after many years in Manila, even I felt anxious…especially for nanay; Fr Willy’s nanay, our nanay, one of the sweetest, most cheerful, most affectionate mothers I’ve ever met; so much love in that tiny frame…who was getting older and weaker. I imagined nanay’s resigned but smiling face, letting her son go even if it must’ve broken her heart into little pieces. Fr Willy must’ve felt the same. Still, he came running.

Don’t many of us think of the vows as mainly a list of no’s? No getting rich; vow of poverty. No marriage, no lovers, no sex; chastity. No refusing the superior; obedience, and all the rest of the no’s in that orbit. Now I’m not about to contest that. Vows do contain prohibitions. Our vows after all, set us apart as religious, for which we lead a different lifestyle, by which we consecrate ourselves to God. True, valid, important, yes.

But God forbid our understanding of the vows ends there, just a bunch of no’s that set us apart from the rest of humanity. They may be so right now and for the next few years for you, my dear Jaclay, Masaya, Renier, Paulus, and Giovanni, because you’re just kicking off the rest of your Jesuit life. But as you grow into the Society, God will show that our promises are not simply a bunch of no’s. God will eventually gently lead you to a place where our vows re-emerge as yeses. And those yeses bring us closer to people and the world, not apart from them. Poverty isn’t so much a no to material things, as it is a yes to a healthy relationship with them. Chastity is not just a no to marriage or sex, but more so, a yes to a mindful relationship with our sexuality and with friendships that don’t seek exclusivity or sex to deepen and strengthen them. Obedience is not a no to desires. Our deepest desires are God desiring in us, remember? Obedience is a yes to a relationship between our desires & the Society’s. Our vows are not merely prohibitive and “isolational.” Our vows are deeply relational.

Notice Mang Tino’s regard of his bike, my dad & mom’s fidelity, Frs Chris and Willy’s availability; notice how a reality much greater than themselves governs them all? Serving the Jesuits is Mang Tino’s reality greater than himself for which his bike is precious to him. Their children were mom and dad’s greater reality for which they stayed faithful. The mission was Frs Chris and Willy’s greater than themselves, for which they come running. This is my second point, dear vovendi. Our vows have a very concrete, not abstract, core impulse. And that is people. “But Fr Arnel, isn’t God the impulse of our vows?” Yes, he is. But I’ve noticed that when we say “we promise to God, we do this for God, because of God, for God’s greater glory,” he’s more often a faceless, bodiless, separate abstraction, especially for us Jesuits who are fully capable of intellectualizing, spiritualizing, idealizing vows, often to a fault. But look closely at what really impels you to make promises and to keep them: people; people whom we know God loves and dwells in, people we feel God entrusts to us. The grace behind making and keeping vows is not an abstract, faceless, bodiless, separated grace. It is God incarnate in people. Again, not just abstract “people,” but people to whom we can actually pin faces and names to, whose call we can hear, whose hands we can hold, whose tears we can wipe away, whose love we can feel, and for whom we feel love. They are the greater than ourselves. And they’re not hard to find. Look behind you. Go ahead, look. See the faces of the reality much greater than ourselves…who love us and whose love will never let us go.

Our ego is often the stumbling block in vowed life. Consider these scenarios, these hypotheticals. First scenario: here’s a vowed man, very ascetic, very simple, very poor; but then he imposes his asceticism, simplicity, and poverty on others; on the other hand, here’s another vowed man who’s acquisitive and overindulges in the latest, swankiest whatever’s. Second scenario: here’s a vowed man, staunchly celibate, chaste, virginal, but then he’s really psychosexually repressed, moralistic, homophobic; on the other hand, here’s another vowed man who’s licentious, wanton, indecent. Third scenario: on one hand, here’s a vowed man who obeys rules to the letter and knows his Constitutions, but then he leaves no room for cura personalis, or representation, or dialogue; on the other hand, here’s an insolent, cantankerous vowed man; he throws a tantrum when admonished and protests new assignments. Now in all these cases, whether the person lives out the vows or flouts them, there is no greater than oneself. There is no relationship. There is just ego and self-gratification. Too much ego, whether in keeping vows or ignoring them, too much ego overrides relationship and deep loving in any promise-making and promise-keeping. And where there isn’t deep love, there is creeping loneliness. The soul clings to itself as its own beloved, worships itself as its own god. But…where there is a concrete and incarnate greater than ourselves and a discerning, life-giving relationship with them, then there’s bound to be love. And where there is love, you’ll see, there’s growing simplicity, there’s deepening and purifying friendship, there’s availability that makes us come running.

“Isn’t this the carpenter’s son? Isn’t his mother, Mary, his brothers, James, Joseph, Simon, Judas? Aren’t his sisters all with us? Where did he get all this?” Words of rebuke, not praise. The religious rigorists were furious because Jesus was relating with people that the Law explicitly commanded be cut off and away; mocking the unsullied by consorting with filth; flouting the Law by embracing sinners! Jesus was crossing out the no’s, overwriting them with yeses. But Jesus wasn’t violating Israel’s promises to God. Jesus was the very fulfillment of God’s promises to Israel, baliktad. Jesus is God’s vow of salvation to humanity Incarnate, made flesh, the living, breathing, loving vow of God. And where was he found? In the very heart of his Father’s living, breathing, loving people.

So, my dear vovendi, our vows aren’t simply a bunch of no’s that set us apart. They are yeses that connect us in a right relationship with people, creation, and our charism. Secondly, we can make and keep promises because of a concrete, not abstract, reality greater than ourselves, and that’s the people in whom God dwells.

I end with a short quote from St. Peter Faber. It really summarizes all I’ve said, but better than my own long and meandering thoughts: “Take care, take care never to close your heart to anyone!” (Repeat).

With open hearts, we pray that our vows keep us thanking like Mang Tino, keep us holding on like parents and married couples, and keep us running when God calls. Amen.