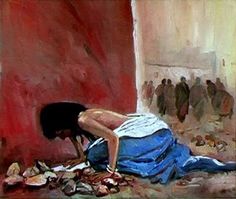 To say that a person is an animal and therefore deserves to be slaughtered is not to play God. Not even God sees us that way.
Let me unravel those words and rewind.
There is an adulteress in the Gospel story today. She is dragged by religious men for all the world to see. They use her (remember she is an animal) as bait to trap Jesus.
They know the good teacher has been wining and dining with sinners, the outcasts of the law and the dregs of society. They get his point. Those who are healthy do not need a doctor.
And so good teacher, they pose to him, here’s a spectacular sinner, an adulteress, someone addicted to lust perhaps, a temptress and breaker of families, probably impenitent. The law says she should die by stoning (never mind that the law does not say anything about the complicit man). What have you to say, dear rabbi?
There seems to be no way out in this desert of stones. If he says no, she should live, he is trespassing tradition and the law. He is no rabbi of the word of God. He is a hypocrite. If he says yes, she should die, then his message of mercy and compassion is selective. He is no healer of wounded people. He is a hypocrite.
The stones are hard and waiting. But the ground is soft and forbearing. Soft enough for him to scribble something on it. He is stalling. He is thinking. He is mourning. After all this time, they still do not see what he sees. He remembers the prophet promising the people that God will put his law within them and write it not on stone but on their very hearts (Jeremiah 31:33). How could their hearts have hardened like those stones in their hands? Their zeal and rage for what they believe to be right blinds them. Forgive them Father, they do not know what they are doing; they do not even know their need to be forgiven.
Let the one who has no sin cast the first stone.
The sentencing is all too brief and it comes from someone who sees right through them, a scribbler who writes on hearts and sees what they do not see or refuse to see. To them this woman is not right, she does not belong, she is an animal who deserves to die. To God, this woman is a lost child, but still God’s very own.
“Woman, where are they? Has no one condemned you?”
“Neither do I condemn you.” God’s mercy nullifies her past even as God’s justice opens her life to the future. God’s mercy pulls her away from a lot of rewinding and regretting, even as that same mercy tempers God’s justice in the end. Thus can Isaiah in today’s first reading (Is 43:18-19) exclaim to us:
“Remember not the events of the past, the things of long ago consider not; see, I am doing something new! Now it springs forth, do you not perceive it? In the desert I make a way, in the wasteland, rivers.”
In Jesus, God is doing something new! By his cross, he is making a way out of this desert of stones.
It is love, not fear, that awakens love. It is mercy, not rage, that quickens mercy.
To judge a sinner to be a person no longer but an animal that deserves no mercy is not to play God. Not even God has the heart to judge us that way.
Let go of that stone in your hand.