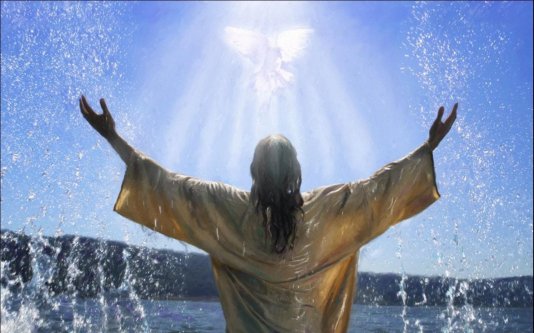 Today marks the last day of the Church’s Christmas season. Jesus’ birth has now been celebrated. His public life comes next. His baptism begins it.

I know, I know, Christmas has been over for ages and we have gone on with life. The American custom is in force: just days to rip down decorations and go on to the next thing.

But now we begin Jesus’ public life, beginning with Baptism.

We hear the voice of God the Father speaking to him:*

You are my beloved Son; in you I am well pleased (Gospel).

Wouldn’t Jesus or anyone else want to hear such words over and over? The beloved of God! It is like having candy and circuses and ice cream and all your favorite things. God has settled upon you as his special one. Everything will be fine.

Except that “being fine” does not turn out to be the true meaning of being beloved.

Let me illustrate with a story.

I was visiting a Jesuit friend of mine in Washington DC, Pete, who is a prankster. He was in the kitchen cooking up homemade spaghetti. Icky mess.

I asked him what time we were due to be somewhere or other, and he said “I don’t know, but we can ask Joe.” Joe was another Jesuit who on that Saturday was working at his job at an official Jesuit building. Pete put the kitchen phone on its speaker and floured in the phone number.

Joe answered and Pete said, “hi, how are you doing, Joseph?” Joe said, “just great.” Pete said, “how wonderful, since you are spending your weekend working.”

Joe came back semi-humorously and said, “No, it is ok. God told me everything was going to be fine.”

Without skipping a beat, Pete said, “Yeah, that’s what he told his Son.”

I was on the floor laughing at such a quick, piercing reply, seemingly delivered with no forethought at all.

But notice what is behind that joke. God does in fact tolerate pain and suffering for his beloved son on the cross. This is the other side of being “The Beloved” of God.

Jesus had gone to the desert to ponder the words he heard from the Baptist. But there the devil offered huge, slick temptations: be big, like me. Build up your earthly power and honor, use your new public status as “Beloved.”

This was directly and deeply contrary to Jesus’ mission, of course, but God let such a temptation happen.

Well, God is like a parent watching a teenager’s growing pains. Help all you can, but definitely do not stop the growing. Temptation and suffering create an urgent need for a person to open up, to broaden their scope, to understand better what love is, to see that love does not mean God taking charge and making everything alright, but rather it means his staying with you, the beloved, continuing to love and admire you, but not just taking over. Love at its root means sharing another’s life, not taking it over.

To paraphrase the Father’s words at the Jordan:

Receive my love that never runs away, never lets go, even in the desert, even on the cross.