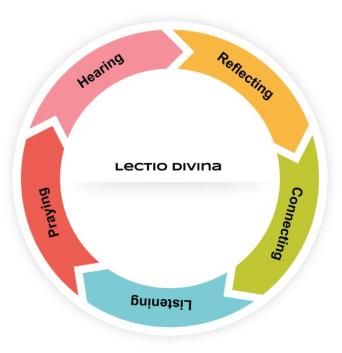 Lectio divina, or literally, “holy reading,” is a Benedictine method of prayer. You read a Bible passage slowly. A word/phrase will soon stir feelings or trigger thoughts. When that happens, you stay on that word/phrase, and gently allow yourself to engage the thoughts and feelings it evokes, whether they’re positive or negative thoughts/feelings. The point of lectio divina is not to control, dissect, analyze, or censor anything, but rather to engage the divine word reflectively and affectively. Then you move on with the reading, until the next word/phrase beckons you to stay awhile. I guess lectio divina is like browsing through museum. You walk around slowly and look at the works of art. One catches your eye; you stay with it for a while; watch what it shows, listen to what it tells. I have not done lectio divina for many years, have had no plans of doing it. But for some strange reason, through this whole week of praying today’s Gospel, it felt like lectio divina led me to itself. So allow me to share with you the words/phrases I stopped by and let you in on the thoughts and feelings that they evoked. Consider it like a photograph of what happened inside my head and in my heart this week.

First, “Jairus.” Desperate for the healing of his daughter. Images of our nation, suffering from an illness we all know but the lot of us not really knowing what to do, or what to begin to say; needing a higher power to strike directly at the illness and rid us of it. Because for some reason, we know we’re ill but we don’t know just how to heal ourselves; scared to take even the first steps. Then I keep reading. Then the word, “hemorrhages”; blood, reminding me of the installation art at Areté: a pile of industrial drums, three drums high & dozens abreast, indicating the running volume of blood from the killings; one person equals 1.5 gallons, 55 gallons equals one drum. Then again, the same word not going away, “hemorrhages;” the flood of unkind, rude and blasphemous words shooting from an official mouth, drawing laughter from a gerrymandered crowd. Next stop: “the crowd is pressing in on you.” A mass of people, most are believers in God, members of religion; coming and going, in and from all directions in a marketplace; pushing and shoving. The Messiah is among them, in plain view! But he is unrecognized. And even when he’s recognized, how to reach him hemmed in like that by a mob? Then I get to the part where the woman admits to touching the Lord’s cloak  “in fear and trembling”. Probably the reason why many of us pull our punches, rather than push back together. We don’t want to hemorrhage, so we’ll just white-knuckle through this festering illness. Then the woman “told him the whole truth.” I then remember the first reading: “God did not make death nor does he rejoice in the destruction of the living.” A divine truth. “He fashioned all things to have being; and the creatures of the world are good, and there is not a destructive drug among them.” The whole truth.” Keep telling a lie and pretty soon we believe it’s true. Keep living a lie and pretty soon we think it’s life-giving.

So, my prayer this whole week was like that, a lectio divina. Same sad images, same desperate feelings. Then towards the end, light dawns somehow. I get to the Lord’s words: “not dead but asleep.” Maybe we’re just sleeping…to keep the peace; like we did for 14 years under Martial Law. But we woke up. “Gave strict orders that no one should know this.” The fully awake Jesus, the Jesus that never sleeps—he will not stop conquering evil with good whether we know it or not. Cardinal Tagle says: “Celebrate the faith! Fill up the Churches! God is the Savior. We do not need to save God. It is God who will save us.” Indeed, God is so much bigger than the biggest wad of insult spat upon him by any one hemorrhaging creature. But that insult sprang us to defend God. But we might forget that God is never defenseless. Maybe God is even saying, “Salamat, mga anak, for defending me. But more than defend me, help me defend the truly defenseless…who need it more than I do.” “For you know the gracious act of our Lord,” the second reading says, “that though he was rich, for your sake he became poor, that by his poverty you might become rich.” God took on human poverty as the way to our salvation. The poor will save us, sisters and brothers, as we help to save them, especially from their deceptive champions who bleed them. But obeying the Lord’s strict orders “to tell no one about this,” we do it without fanfare, seeking no extra points in heaven. We keep on doing the good and witnessing to God, “not tell anyone about this,” in spite of invectives flung against God, with us in tow.

And finally, talitha koum. Life will conquer death. The good will conquer the evil. We’ve seen this happen again and again in our country, this constant salvation from people of darkness. But admittedly, we are slow in waking up from sleep, bringing us very close to death as a nation. But for some reason, God has had a soft spot for us Filipinos. In spite of our repeated mistakes, our wrong choices, and our soporific social apathy—in spite of all that, God pushes through the crowd to get to us who are “not dead…only sleeping.” What kind of God does that? What God keeps saving us from the edge to which we bring ourselves? Maybe he is a “stupid God.” Thank God for that passage from Paul to the Corinthians: “God’s foolishness is wiser than human wisdom; God’s weakness is stronger than human strength.”

Lectio divina. Maybe I should try it more often; to slowly and reflectively read God, and hear him read back to us the signs of our times.