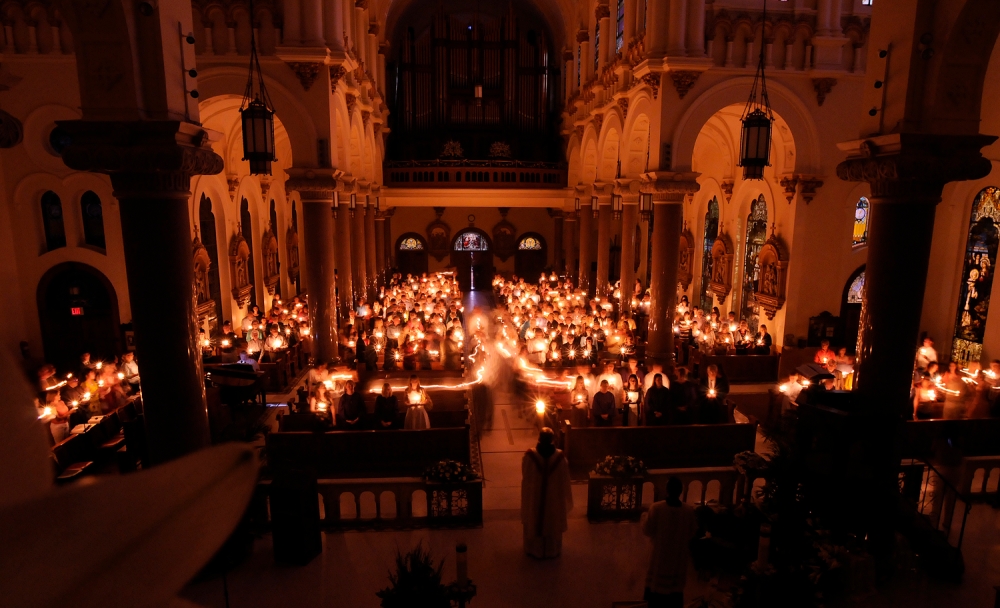 Probably I have told you this story before, but it bears on Sunday’s readings. The incident happened a long time ago, just before I was ordained. For some reason which I cannot remember I had been chosen, as yet unordained, to give the Easter Vigil homily at the hugely packed College Church at Saint Louis University.

There was a complication, of course. I was scheduled to be on my ordination retreat at the very same time. So I rode with four other Jesuits from the retreat place way out in the countryside, into the city, into the church, into the sacristy, into an alb, out to the altar. Need I say that I was very nervous since I had only given a few homilies before in my life.

It happened that a huge thunderstorm had struck just the night before. I had watched it from the six foot high glass doors of the retreat house. If you are not from the Midwestern part of the United States you may not know the brutality of our storms. Dark rain pouring, volcanic lightning flashes blistering forth in naked power. Every single smallest detail of the landscape visible for seconds, as if twenty thousand florescent lights had suddenly flashed on and then off again. The tremendous power humbled me about my upcoming duties.
Its radiation reminded me of what God told the prophet: “Do not look at me directly as I pass by; the sight is too much for your eyes.” We are too small, in other words.
Easter Vigil had a much more humane version of light. The big Candle was lighted from a fire at the back and then the large assembly lit their small tapers gradually from the one Easter flame. Because I was in the sanctuary I could witness the soft light spreading forth from these countless miniature candles, combining the crowd into a gentle oneness, a hearth of faces. Wrinkles forgiven, comforting glow making each face a vessel which held deep inside itself the quiet light of the Lord.
Such a contrast: thunderous power followed so quickly by the warmth and tenderness of small light. It enacted the true contrast between God’s transcendent greatness—too much for human eyes—and Jesus’ peaceful love. He absolved wrinkles and crippled legs and unseeing eyes, our glimpse of the awe-filled intensity of God-the-infinite through our tiny, finite eyes. Jesus is God as one of us. He is lightning is turned into candle glow.
Alright, you say, that is very interesting, but what about this week’s Gospel? Ok, in the Transfiguration, Jesus the small light reversed himself and showed up as God the infinite fire. My meager encounter with lightning was nothing compared to this. Why did such a frightening transformation take place?
One appealing speculation would be that Jesus needed to show them (and us) the true connection of light to light. At the very center of each bolt of lightning is the same stuff that gently covers our faulty faces and makes them glow. God cannot unmake himself and put out the light that he is. But he can filter it and offer it to anyone who will look
… and occasionally remove the veil so we don’t forget what we are seeing.
*image from the Internet