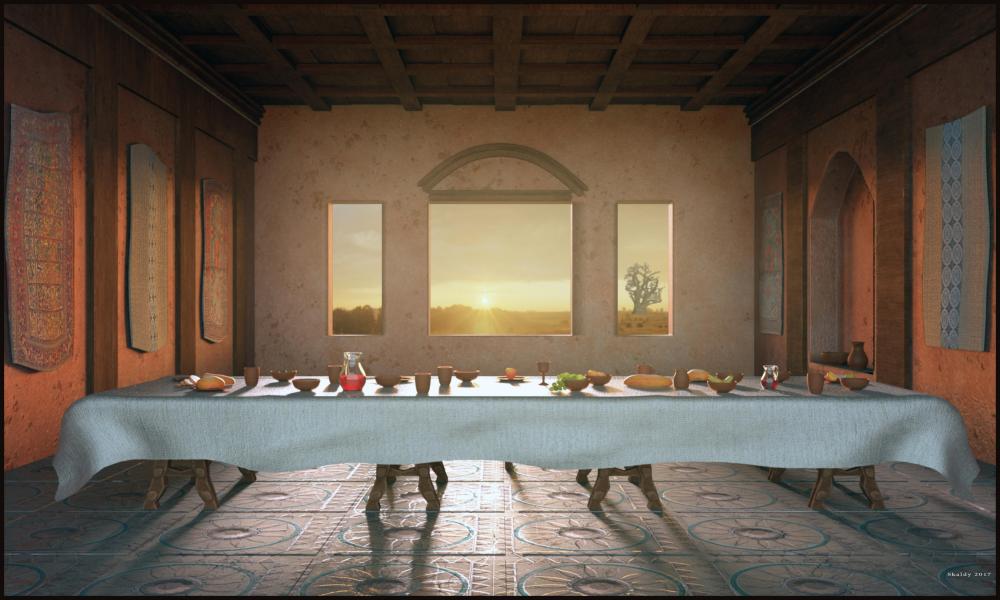 They gathered in the twilight and lit candles. Through the window they could see the moon, large and pale on the horizon. It was the night of Passover – the most important feast on the Jewish calendar. They came together in prayer, their voices muted, their faces outlined by shadows, their eyes watchful and filled with wonder.

The traditional questions of the Seder meal were asked. Whey do we gather tonight? Why do we eat unleavened bread and bitter herbs? The ancient story was retold – a story of freedom, a story of journey and passage. In the herbs they saw glimpses of the tenderness and the terror that was still to come. The bread was broke. The cup was passed.

The ritual appeared to unfold like any other Passover meal. But this one was different. Jesus waited for their attention. Somehow he wanted them to know, to understand, to remember what he was about to do. His eyes were intense; his voice steady. He spoke: “This bread…this cup…My body given…My blood poured out…remember Me.”

There were unspoken questions in the disciples’ eyes. The event of Sunday confused them. Jesus’ words seemed to have been lost in the night. But they were not. After the terror and the confusion, after the despair and the darkness, after the surprise and the disbelief, after the wind and the fire – after all that, they would remember. Gathered in this same room they would break bread in His name and pass the cup of His blood. They would remember He had accomplished in His life what He had done in symbol and mystery that night in the upper .

And it is ours. When we celebrate the Eucharist, we gather at a table which has a four-thousand-year old memory. Its is a meal which takes us back into the life and experience of a nomadic people, a people chosen by God to become a nation of priests and prophets. When we gather in His name, their memory is also there.

Jesus wants us not only to remember Him but also to carry the image and the history of His ancestors. The table calls forth the memory of slaves about to set out on freedom’s dangerous road. Ir speaks of journeys and the terror of the night, of tenderness and of an infinite love. It carries the taste of oppression and the promise of liberation. It bears the memory of paschal moons and the desert road. It bears the imprint of wounds transformed by risen life, of cheeks still salty with tears, of eyes surprised by joy.

The Eucharist is a meal of liberation. It is a banquet to nourish the inner exodus of the heart. It celebrates our inward passages of life: the conversions, the breakthroughs, the pain and the purification, the memory and the promise.

We remember as the disciples remembered. And we also begin to understand. It is not the Lord who makes the dark journey that leads to light. It is not only Jesus who gives His body as bread and pours out His blood as wine. We are all sharers in the Pasch of the Lord. We do not always give ourselves in generosity or in the full awareness of our dignity and call. There are Sundays where it enough that we can stand at the table, and stammer our response. But even then, we know the words and the vision which we share.

There is a moon rising over our table, and questions in our eyes.

What will tomorrow bring?