In boxing, when a trainer sees that his boxer is being badly beaten by his opponent, he throws a towel and the fight is over. Throwing in the towel then, is a sign of surrender and giving up. But in the arena of loving, it’s a different story. A towel around the waist gives us a different meaning – it is a sign of commitment to service and genuine loving.

In our Gospel today, we see Jesus preparing himself for the greatest fight of his life. It was one person against the world. He was facing a dreadful, shameful and painful death. Clearly, in the eyes of the world, it will be a lopsided victory for his enemy: “Jesus knew that his hour had come to pass from this world to the Father. The devil had already induced Judas to hand him over.” (John 13:2).

At that moment, it was very tempting for Jesus to throw in the towel. In fact, when He prayed in the Garden of Gethsemane, he entertained the thought of throwing in the towel and giving up, “My Father, if it is possible, take this cup of suffering from me. Yet not what I want, but what you want.”(Matthew 26:39).

In our boxing arena called life, for brave fighters like Jesus, throwing in the towel was not an option. Jesus courageously faced his enemies up to the end: “He loved his own … and he loved them to the end.”(John 13:1). Jesus knew that nobody loses in loving, and there is no such thing as wasted love. And so, instead of throwing in the towel, Jesus decided to tie the towel around his waist and started washing the disciples’ feet. The Son of God gladly takes the role of a slave, ever ready to wash dirty things including the disciples’ dirty feet. It is fighting back with the towel in the name of love.

One of the difficulties in washing things is the likelihood of getting dirty. We don’t want to clean things because we don’t want to mess our clothes. But when one loves, he is willing to get dirty. A mother finds joy in bathing her soiled child even if it means getting soiled. A boy bathing his dirty dog will eventually get wet. When one cleans things, he will likely get some dirt. The dirty towel becomes the symbol of service. 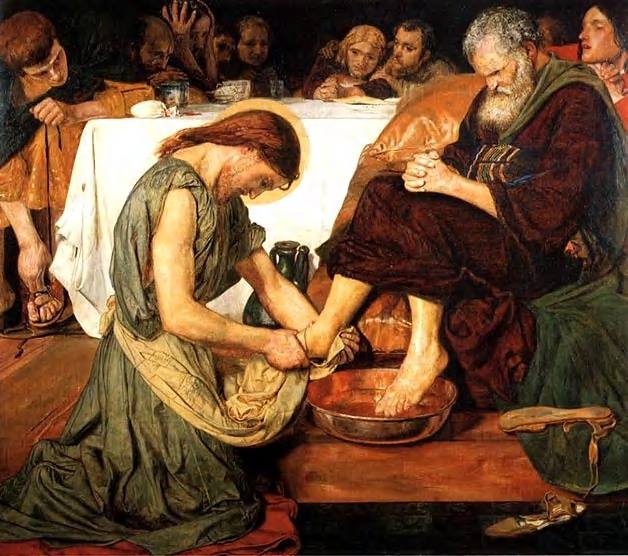 When Jesus have decided to wash the disciples’ feet, he knew that he would be tainted with their dirt – their sins. But out of his love for us, he joyfully willed it. He died for our sins. His blood on the cross cleansed and renewed our wretched spirits.

But our periscope today does not end in washing feet. After the washing, Jesus put his clothes back on and said to the disciples, “Do you understand what I have just done to you? You, then, should wash one another’s feet.” (John 13:12-14).

In this world of consumerism where “service without a reward or compensation” is not a popular option, the only way to fight is to “fight back with towel” – to be a servant of all like Jesus. To serve and not to be served. To love and not to be loved … until death. It is a road less travelled and seldom appreciated; ironically, it is the only way to victory in the boxing arena called life.