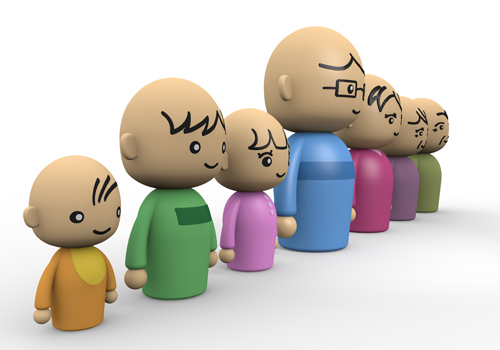 A few years ago, two friends of mine took the whole family to a series of workshops about family businesses. That was new to me: families going on workshops about running the business. “It’s very important these days, Fr Arnel,” my friend said. “Because only twelve percent of family businesses survive as the third generation takes over.” That was new to me, too. Eighty-eight percent of family businesses don’t make it beyond the second generation. And only three percent of those that make it to the third generation actually makes it to the fourth. I guess that’s why the Chinese proverb says: “Fù bùguò sāndài” – wealth does not pass three generations. Just last night, I learned from a friend who teaches in AIM that we actually have a Pinoy version of this: bahay-kubo, bahay-na-bato, bahay kubo.

Many family businesses fold under the third generation, they say, because the grandchildren are handed everything on a silver platter. They have no idea about the unbelievable difficulties that dad, mom, lolo, lola had to surmount while building the company and keeping it afloat through the hardest, leanest times. Secondly, while the first and second generations painstakingly built close relationships with their most faithful employees and business partners, they say that the grandchildren tend to take that for granted when they come around. They want bigger profits more than maintaining relationships. They can’t seem to connect the dots that good relationships boost trust and morale. High trust and morale boost creativity and commitment, which in turn boost profits. But of course, that takes time. But today’s grandchildren, baby-sat by high-speed internet, they cannot wait. So, they cut corners and enter into quick-fix deals. No sooner that a little profit comes in than everyone rushes in to take a piece for themselves—their children, their in-laws, the in-laws of their in-laws, etc. Then, fù bùguò sāndài happens. Wealth doesn’t go past the third generation. The company grinds down and fizzles out.

Sisters and brothers, we all have a streak of wanting to get to the splendor but without the struggle; to reach victory without the misery; to be rewarded the resurrection without accepting the passion. Yet, we know very well there’s no such thing, not on this planet, anyway. Suffering just isn’t optional if anyone wants to be transfigured. Whether it’s family, or marriage, or business, or our personal selves—anything we wish to reach its best shape and form must be bent, broken, and painfully set aright first. My contemporaries often complain to me about their children and their young employees. “Itong mga kabataan ngayon, they can’t take a little suffering. Ang hihina ng loob. They jump from job to job because they ‘get bored.’ They want a quick promotion before they even earn it. And yet, the smallest disappointment, the smallest failure, sends their world crashing down.” I don’t tell my friends, but in my head, I say, “Eh, sino bang nagpalaki sa mga ‘yan. Eh ‘di tayo rin.” We overprotected them and overindulged them as they were growing up. But now, we tell them, “Apo, no pain, no gain. No guts, no glory, anak. Pag may tiyaga, may nilaga, hija.” But they only see that in the movies…which they watch, by the way, thanks to 500 megabits-per-second firing through their gadgets. Or what I call, today’s “babysitter.”

That evening on Mt Tabor, the Transfiguration fascinated and consoled Peter so much, he wanted never to leave the place. Never mind Jerusalem. Up there, he saw with his very eyes that his Master was really and truly the Son of the Boss, the only Heir to the CEO of CEO’s. This was the Messiah whom the Law (represented by Moses) and the Prophets (represented by Elijah) had long foretold. “Let’s just stay up here! It’s awesome here. Forget Jerusalem. I will build three tents! You want?”

But Jesus said no. The Son of the CEO would have no short cuts. No cutting corners. No resurrection without the passion. Jesus never subscribed to “expedited but long-term success,” minadaling tagumpay na pangmatagalan. To him, that was an oxymoron. No; he would climb down Tabor and return to Jerusalem where some waited for him to keep him, and others waited to finish him off.

From way back in his generation, the Son of the Boss already taught by example: that anything we wish transfigured into splendor, victory, new life, especially ourselves—well, hardship and suffering and many deaths will be par for the course. And this is a shout-out not only to the millennials and Geneartion Z, but also to the lolos, lolas, the dads and moms who tend to overprotect and baby-proof (!) the children, to life-proof them. In the things that really matter in life, there’s no such thing as “expedited but long-term success.” Walang pangmatagalang minamadali. And that’s not just from family corporation workshops of today. That’s from the Son of the CEO himself, and experience backs his wisdom. If we want a transfiguration in our lives, suffering and passion are par for the course. Not optional. Imperative.

I was thinking, if one generation equals 30 years, then the wisdom behind the Transfiguration is now 67 generations old and counting. Not bad for a family business ethic!

I end with words from one of my favorite Christian writers, Khalil Gibran. “Out of suffering have emerged the strongest souls; the most massive characters are seared with scars.” This can be baon for our second week of Lent and beyond.